Illustrator Benjamin Marra entered our orbit a few years back when we began working on Warfaring Strangers: Acid Nightmares. Our original pitch describes the scene we intended to portray on the black-light style gatefold sleeve: “All the tunes are bad-vibes/bad acid trip songs, so for the visuals we are envisioning a 1960s-era motorcycle madman riding through some kind of dystopian, drug-fueled nightmare. We’d love to see crumbling city structures, with hypodermic needles and bongs mixed in as buildings and pills flying through the air. Drugs everywhere. Coke lines, needles, spoons, bottles of booze, etc. Possible outcomes include: skulls melting, psychic/psychedelic vision, alien heads exploding, street gangs in varying degrees of nudity. The inside gatefold would be a black and white continuation of the story. Basically the hero of our story ends in some tragic crash, blood and bones flying everywhere.” 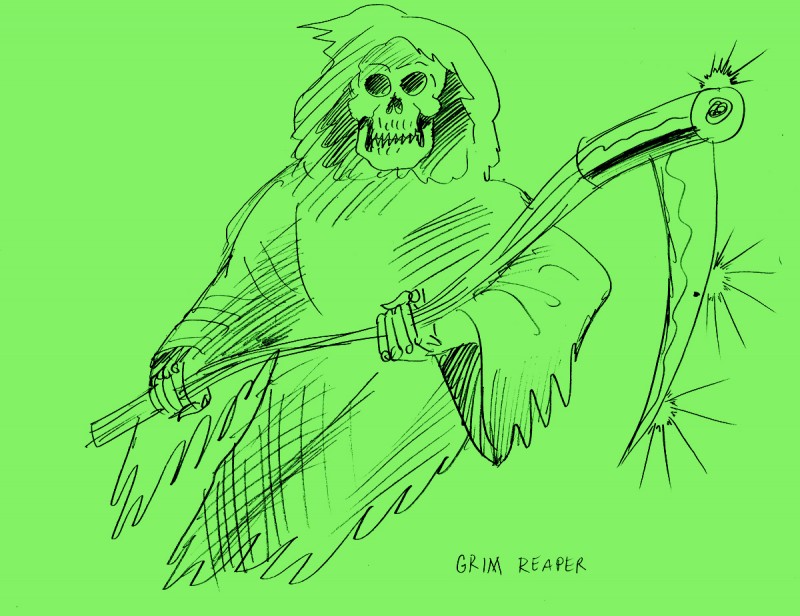 Did you connect with other artists growing up, was there a comics scene there, how did you find your way into art?

I had childhood friends who were also into art and drawing. Being around them and seeing what they were working on pushed me to work on my own stuff. It also gave me an idea of how to visually problem solve and recognize different personalities through artwork. There wasn’t much of a comics scene really. There was a small, Mom & Pop Comic Books and Baseball Cards collectibles shop on the main street in my town. I went there a lot. They’d get annoyed with me because I’d ask to see the back issue boxes, which they kept behind the counter, and I’d flip through them without buying anything.

While discussing the art direction we were looking at a lot of references; underground comics, Dope Rider, Orange Sunshine, Heavy Metal Magazine, all sorts of blacklight and hells angels art. That work certainly guided us in our decision to call you. We all felt your work had a psychic connection to that world. Was the aesthetic of the late ’60s and early ’70s a part of your repertoire already? Any specific stuff from that era you are interested in?

Absolutely that stuff was definitely a part of my well of inspiration already. I'm fascinated by black-light art, pinball machine art, exploitation movies, comic books, old school Dungeons & Dragons illustrations, pulp science fiction paperback covers, flash art, prison art, not to mention various heavy metal album's art, etc. It’s what we might call Commercial Folk Art or Applied Folk Art. Paul Gulacy’s run on the Marvel Comic Master of Kung-Fu is of particular note for me from that era. Also Giallo movies and many other horror and exploitation faire impress me. Heavy Metal Magazine is up there for sure, as well as The Savage Sword of Conan magazine. Teen Angel’s work is also particularly resonant for me. Frank Frazetta’s stuff is of course always memorable. The stuff the underground comic guys like Crumb, Spain, and Wilson, were doing out of San Francisco continues to influence our current culture in unqualified ways. Speaking of influencing our culture, the work of Jack Kirby (we just celebrated what would have been his 100th birthday) in the late ’60 and ’70s has forever altered not just popular culture but our entire society.

That’s a solid list. I see the influence of Applied Folk Arts pretty much everywhere. So much of the art I encounter has that distinct feeling of being aware of a deep history of commercial art, but more interested in that secondary market where you can make real things but without the pressures/responsibilities of a large budget. Definitely working in the archival/reissue record world, you see these record covers from the ’70s that were drawn by the bass players sister and they are incredible. Do you think that kind of freedom had anything to do with starting your own imprint?

I’m sure it did. Freedom wasn’t my goal when I started publishing. I did it out of necessity. I wanted to see my stories printed as comic books and didn’t believe anyone else would want to publish the stuff. So I took it upon myself to do it. I think it’s a similar attitude with those old record covers. You just want to see something materialize so bad you’re willing to do whatever it takes to get it done including getting your bass player’s girl to paint the front cover. Whatever it takes to see it happen. 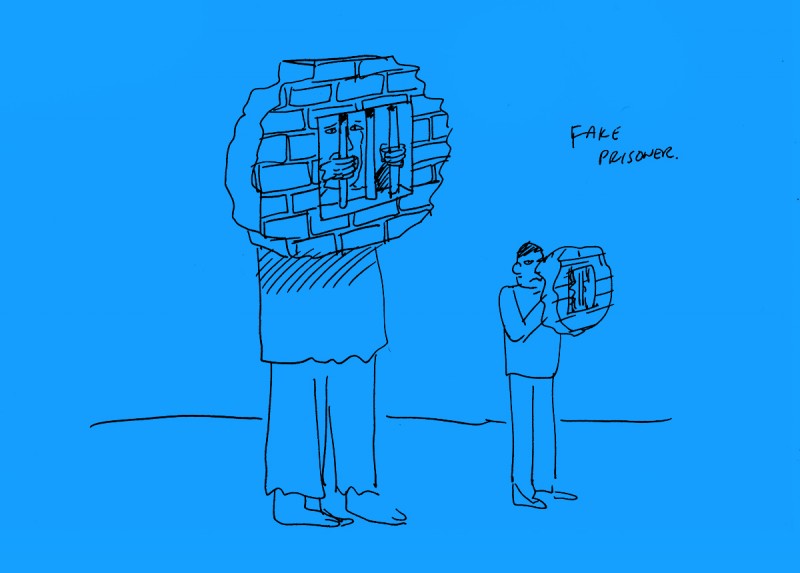 I really love that Death Wish III sketch on your site. Your work deals with a lot of vigilantes, hard-boiled noir types going rogue, taking the law into their own hands. Is that a self reflection or just an archetype with inexhaustible outcomes?

Death Wish III is one of my favorite movies. I got a tattoo of Bronson’s portrait on my arm because of it. In my work the subject of vigilanteism, personal code, or lone wolf ethics, is a reflection on a formal archetype. It may have a deeper, more personal self-reflection purpose on my own notions of what it means to be a man. Comic books, which are my first love, have forgotten the power of this archetype. At least the mainstream comics have. One must look to past stories for inspiration, like the Death Wish series. I do think the archetype provides inexhaustible paths of narrative and visual exploration.

So do you usually come up with a story first, or do you draw characters and put them in situations?

It’s pretty organic, but yeah, the story usually comes first. And then I can see the whole thing in my head in sort of a hazy fog. It’s not until I start to put things down on paper that I actually understand what I’m seeing. It’s just a blurry version in my mind, a combination of story events, character designs, and how things should feel. But, yeah, it always starts with a story, usually one specific scene and then branches out quickly into characters, themes, and other elements the story demands.

Are you pretty disciplined about drawing?

Pretty much. I draw every day no matter what. Either for my own projects or for some gig. But it's pretty easy to be disciplined when that's all you really want to be doing. I wish I drew more. I sometimes carry around a sketchbook and draw and need to do it more. I need to be sure I’m maximizing my time.

Do you have any particular stance on the issue of partying while making art? 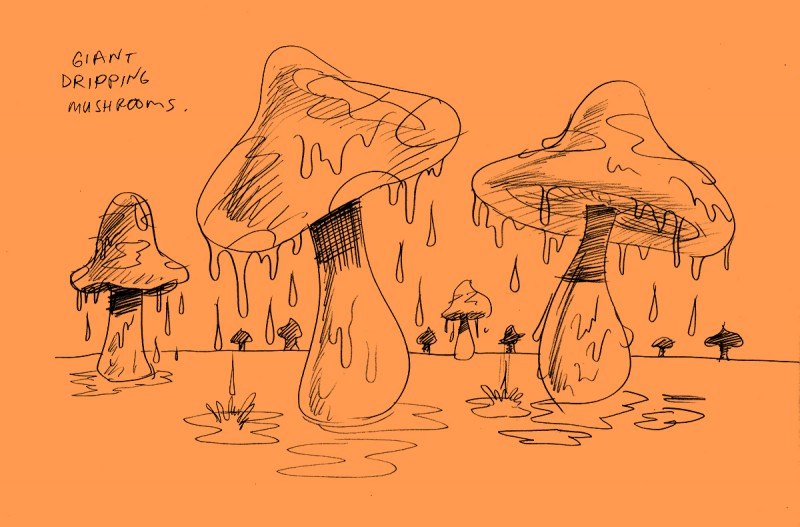 Good point, I was kind of thinking of taking drugs to make art but we don't have to get into that.

BM: I guess it all depends on the individual. I know Crumb says drugs were critical to his early comic books. For me I’m sure drugs would suppress any creativity.

What are you working on next?

I’m working on a few comic book projects. One with Joe Casey for Image comics. And then a new graphic novel. Right now I’m working on an animation project which is sucking all the time out of my schedule. [It’s] an animated piece for ESPN’s 30-for-30 shorts about Elvis Presley’s obsession with racquetball.

Lastly, what's it like to be a Grammy nominated comic book artist?

BM: It’s pretty weird. I believe I’m in rare company to be nominated for a Grammy as a cartoonist. A Grammy nomination is probably the last award I’d ever expect to be nominated for. But I’ll take it. It’s not a bad feather to have in my cap. 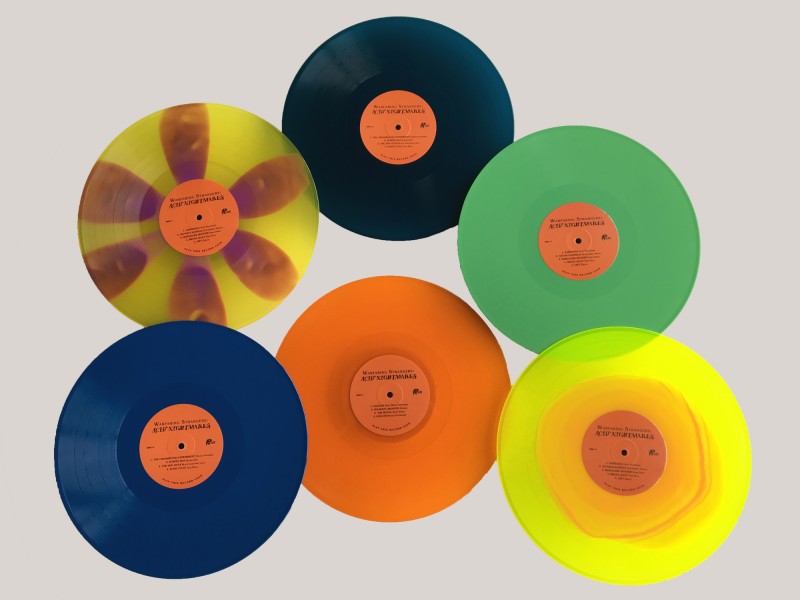