Calvin Johnson, not yet 30 years old, was already an elder statesman of Olympia’s music scene. More importantly, he was its biggest booster. “I always tried to get people to come to Olympia,” he said, “but for a long time there wasn’t anywhere to play. I got Half Japanese to come here in ’85 or ’86 and they played in the hallway of the Chinatown, where we all had studios. We always had to improvise things.”

As a student at Olympia High School, Calvin had been taken in and treated as an equal by the older staff at KAOS, where he trained his junior year. As an adult, he showed the younger people he met the same level of respect. “Calvin doesn’t believe that people under 18 or 21 are any less interesting or valid than adults,” explained Tobi Vail, who formed the Go Team with Calvin when she was 16 and he was 23. “He was an isolated high school kid himself. When you’re that age and people teach you about music, or give you access to the resources to teach yourself, you pass that down the line.” 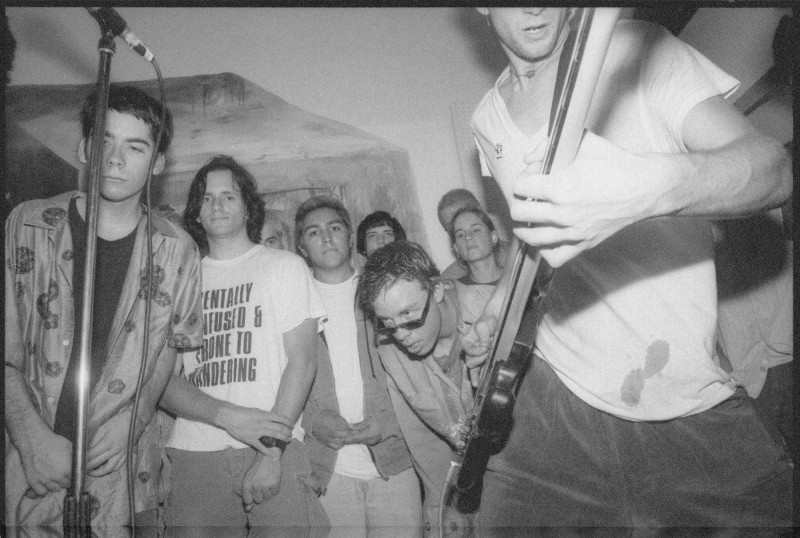 Little by little through the fall of 1990, the members of Giant Henry developed friendships with Calvin and Tobi, along with the members of other then-local bands like Bratmobile and Seaweed, many of whom lived together at The Martin, an apartment building on Washington Street. “I remember meeting Justin and Adam that previous summer,” Tobi said. “They were both frowning and both wearing orange stocking caps and one of them had a puffy jacket on—again, in the summer. And I think one of them actually said something about girls being dumb. Like, ‘That’s because girls are stupid’ or something like that. There were other kids their age at shows but most of them were the big shorts, generic types, and the Tumwater kids seemed interesting. They didn’t all drink, but they’d come to my house and I’d buy them beer.”

“They were into pop culture in this really cool way,” Calvin remembered. “Like them being into Planet of the Apes: one of the first movies I went to on my own was Conquest of the Planet of the Apes, when I was 10 or something. And here it was almost 20 years later and they’d rediscovered it and claimed it as their own.”

Calvin was so taken with the Planet of the Apes fascination he even attended a marathon at Brent’s house. “He showed up and introduced himself to my mom and had a huge bag of snacks,” Brent recalled. “That was the hippest marathon we ever had. Tobi came, and Allison and Molly from Bratmobile. They were all older, but we didn’t have any hero worship. It felt really natural.” 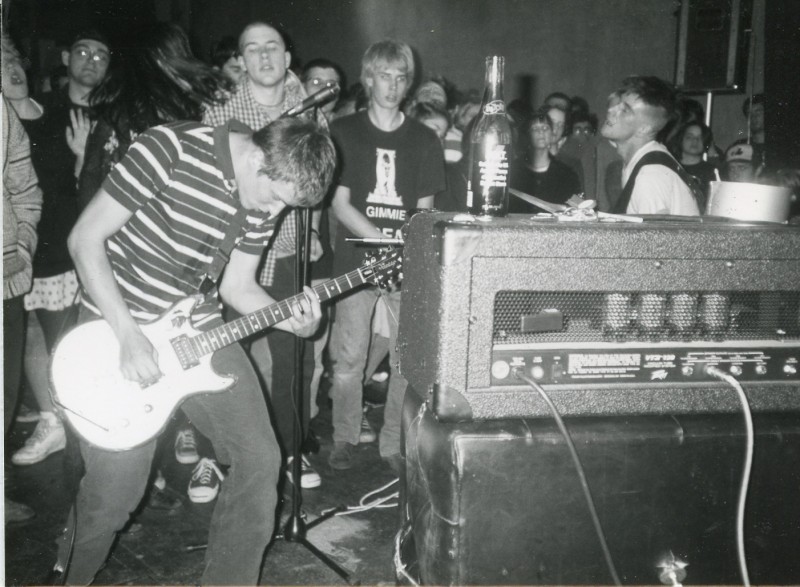 “People forget how different things were then,” Tobi said. “There was only one video store near Olympia—Tumwater Video—and you’d have to rent a VCR half the time just to watch a movie. So people would become friends over access to things like movies, records, books, and information.”

There was music, there were movies, and there were zines. Tobi’s was Jigsaw; Allison and Molly had Girl Germs. Brent, Brandt, Vern, and Justin all contributed to Chris Jordan’s Pulp, and then Vern and Justin went off and started zines of their own: Vern’s was Punk in My Vitamins; Justin’s was Germ of Youth a.k.a. Joe Preston’s Legs, named in tribute to the new bass player of the Melvins, Joe Preston, whose own zine, Matt Lukin’s Legs, was a tribute to the previous Melvins bass player.

Together they had their own secret society, Donut Nation. “We hung out at donut shops late at night and we’d make fanzines and drink coffee and skateboard in the parking lot,” Tobi said. “I miss the days before everyone started hanging out in bars.”

It is now necessary to say a few words about Nirvana.

First: whatever the perception of music fans outside the state of Washington, to anyone who lived in Olympia in the late ’80s and early ’90s, Nirvana is considered, now and forever, not a Seattle band but an Olympia band. “Maybe also an Aberdeen band,” said Slim Moon, who befriended Kurt Cobain and Krist Novoselic in the mid ’80s through their mutual love of the Melvins. “But they were only headquartered in Aberdeen for a very short time. That whole time they were making a name for themselves and writing songs and touring, they were Olympia. Even when Nevermind came out, they went on tour thinking they’d be back. And then the tour kept getting extended, and eventually Kurt’s landlord evicted him and threw his stuff out on the street, and he just never came back.”

Second: Nirvana played everywhere there was to play in Olympia, constantly, and the influence they had on younger bands like Giant Henry was inevitable. In the winter of 1991, Giant Henry recorded 11 songs on Brandt’s four-track, which they later dubbed to cassettes and sold at shows. Listening to it, Nirvana aren’t the only band that comes to mind, but they are the band that comes to mind first. “If you think of Nirvana as their original demo and Bleach, which was a lot of re-recorded versions of those songs,” Slim explained, “they were just as important locally as the Melvins.”

Nirvana played everywhere there was to play in Olympia, constantly, and the influence they had on younger bands like Giant Henry was inevitable

Slim arrived in Olympia in 1986, at roughly the same time as Cobain. Born in Montana, he spent his “formative punk-rock years” in Seattle, where—thanks to seeing bands like Beat Happening at Gorilla Gardens, one of the city’s few all-ages venues—he’d been introduced to the Olympia music scene. “Those bands had some irony, but it wasn’t like Stooges irony, it was more playful,” he said. “It wasn’t testosterone-charged and it wasn’t masculine. And when people would come up from Olympia and Tacoma, they danced completely differently. There was lots of bodily contact, but instead of this violent slam-dancing, it was almost like a giant group hug for an hour.”

A high-school dropout, Slim earned his G.E.D. and eventually enrolled at Evergreen, though he quickly stopped going to class and was just as quickly asked to leave. He formed a short-lived band, Nisqually Delta Podunk Nightmare, with Kurt Flansburg of Dangermouse, Mike Dees from Fitz of Depression, and guitarist Dylan Carlson. Slim and Carlson founded Earth with Cobain on bass, but then Earth relocated to Seattle, where Dave Harwell and Joe Preston took over for Cobain. After eight months in Seattle, Slim had a falling out with Carlson and returned to Olympia. It was 1990.

“I had this attitude, every band I’ve been in breaks up, fuck this, I’m going to do things on my own from now on,” he said. “I discovered MIDI and bought these cheap keyboards, and realized I could program drum parts, sequence some stuff on a four-track, and then I could run it all, synch it so it would play drums, keyboards, and whatever else I put on cassette. And then I could just play a little guitar and mostly sing.” Slim named his new project Witchypoo, after the antagonist from 1969 TV series H.R. Pufnstuf.

Of the first handful of shows Giant Henry played in Olympia, two were with Witchypoo. The first was a show at the North Shore with Steel Pole Bath Tub; the second was booked by Brent Turner and Chris Jordan and took place on January 13, 1991, at the MODS on the campus at Evergreen. It was set up primarily for Green Day, then on one of their first tours, as well as Brent’s TV, a band from Arcata, California. Rounding out the bill was Fitz of Depression. 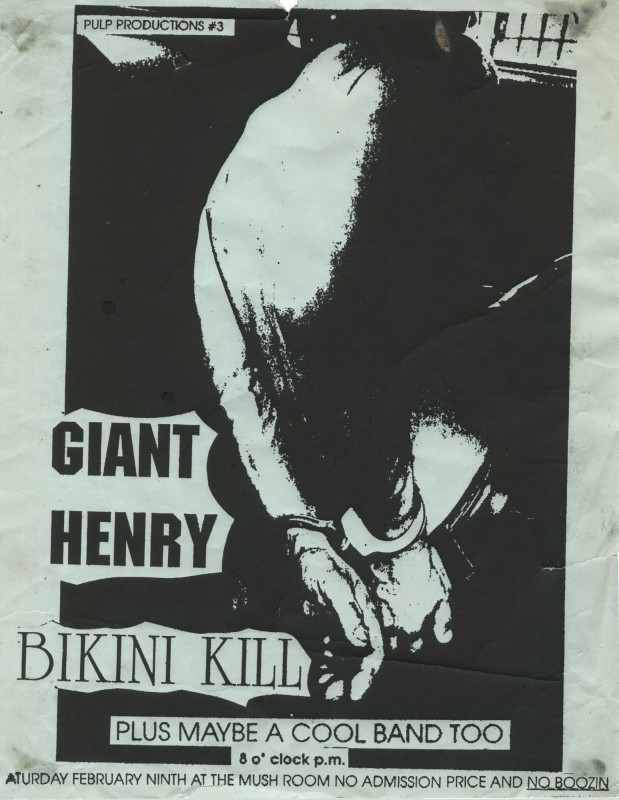 Giant Henry and Witchypoo played together again later that spring, in the basement of a house on Phoenix Street rented by, among others, visual artist Tinuviel Sampson. The Witchypoo lineup that night included Cobain, Dave Grohl, and Joe Preston; also on the bill were Bikini Kill and Bratmobile. Giant Henry had been invited to play, but Vern, who had a job as a projectionist at the State Theater on 4th Avenue, was scheduled to work. Brandt and Justin—with Vern’s blessing—recruited Adam Shea, who by then had moved back from San Francisco, to fill in on bass.

“We didn’t play any of the serious Giant Henry songs,” Adam said, “just the stupid old ones. And then some Flipper and Black Flag covers.” Since Vern wouldn’t be there to sing it, they enlisted Chris Jordan to do vocals on his namesake song.

“We got about halfway through the set,” Brandt said, “and when we started playing one of the Flipper covers, ‘Life’ maybe, all of a sudden these couch cushions were flying at me. I looked up, and it’s Dave and Kurt throwing them.”

We got about halfway through the set, and all of a sudden these couch cushions were flying at me. I looked up, and it’s Dave and Kurt throwing them.

The show was a snapshot of the era. “All this shit was coalescing,” Justin said. “Bikini Kill was forming; Sub Pop was starting to blow up, and that was trickling down to Olympia; Nirvana, it hadn’t happened yet, but they were about to become huge. It was crazy, and we were so young, and I was totally entrenched and obsessed. Once we got involved, it just wasn’t an option anymore. It was like, we’ve gotta be involved.”

The only thing standing in the way was high school.