Buried within the 1,200 Cuca master tapes, a ceiling-high tower of cardboard Home Depot boxes, sat a small collection of forgotten master tapes. Originally a recording studio, Cuca grew into a record label and eventually a pressing plant. Independent artists across the midwest mailed their master tapes to the Wisconsin pressing plant to seal their sounds into vinyl. For whatever reason, not all of these tapes made their way back to their owners.

Talk to anyone at Numero and they’ll tell you that opening a box of small, mismatched, and poorly labeled tape reels is akin to trying on a windbreaker at a thrift store and reaching into the pocket to find a grip of virgin scratch off lottery tickets. Even if you don’t win big enough to quit your job, you’re going to enjoy the ride. A seemingly random box of tapes can turn out to be anything from home recordings, custom jobs whose owners never paid for their orders, or forgotten demos. A random box is the beginning of many a Numero discovery story, like the story of Patti Whipp. 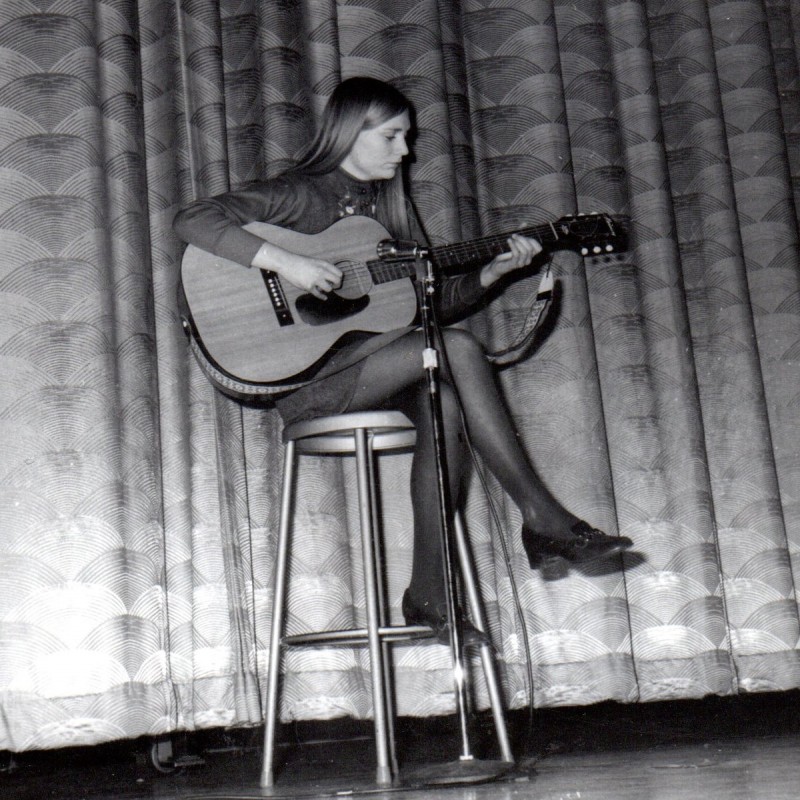 An unassuming 7" reel labeled “Patti Whipp” sat at the bottom of this box of unreturned custom jobs. The tape revealed a young girl’s voice layered over acoustic guitars that sent chills through the room. A quick internet search told of a known but rare 45 on Tevar Records, a largely undocumented label from Michigan with just two releases. Tevar took its name from the reversal of the last name of Jim and Philip Ravet, a pair of brothers who founded the label. A spelling error on the 45 label credited the songwriter as “Pam Whipp,” leading the archival team to assume that the young voice on the record was ghostwritten by a mother or older sister. The 45 label also credited a backing band called The Infinite Blue, widening the network of possible points of contact. Despite this information, the current whereabouts of this cast of characters remained a mystery.

In terms of being able to find someone from this time period, the practice of having women change their last names after marriage is almost as effective as the witness protection program. Letters to the Pattis, Patricias, and Pams of the world found few answers. Months of silence and unreturned letters pushed the archival team to dig deeper and hit the phones. A few phone calls later, Patti Quick answered. 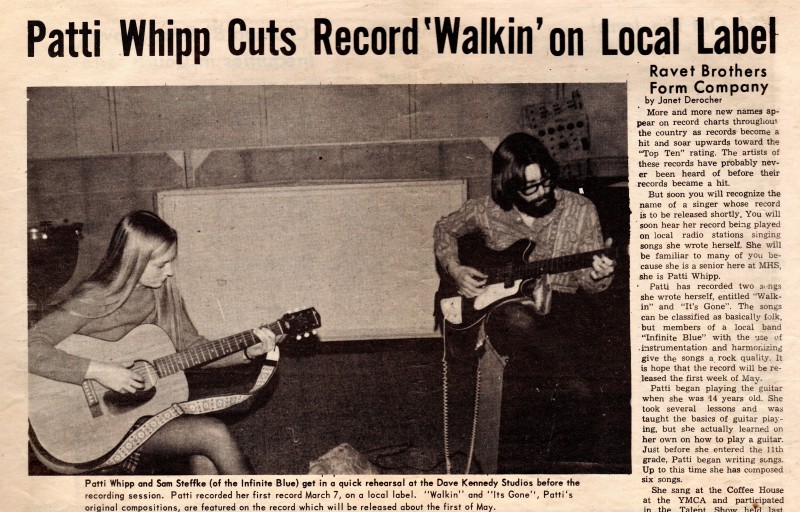 Patti Quick, formerly Patti Whipp, had married her highschool sweetheart, Mark Quick, and relocated to Colorado. But before all that, she was a student at Menominee High School in Michigan who loved the guitar. “Growing up, I was enamored by my brothers’ finger picking,” Patti recalled. “I taught myself how to play when I was a freshman in highschool, when my parents gave me my own guitar.” She sat alone in her room and played for hours, initially imitating her brothers, but soon developing a style all her own.“The summer after my junior year of high school, I took a trip to California,” she continued. “I came back feeling more creative with my words and feelings. I felt like I could finally express myself.”

Patti took these feelings and put them to work. “After my trip, I started writing songs about my experiences and feelings, like driving along Highway 1 in California,” Patti remembered. “I wrote ‘It’s Gone’ after Mark left for college. I was sad and lonely after having him everyday over the summer. I was emotionally trying to figure out my life. I was a senior, it was my last year with my friends, and Mark was gone.”

Meanwhile, the Ravet brothers were experiencing their own wave of change. “I first heard Patti Whipp perform in our annual high school talent show,” Jim said. “Her clear, simple style and honest delivery impressed me. But what really stood out was the fact that she was singing songs that she composed. I didn’t know of any local musicians that were doing that. I filed that away in my mind. Although the Class of ’70 was relatively small, under 300, I didn’t know Patti very well.”

Surrounded by the talent of his close friends, The Infinite Blue, and classmate Patti Whipp, Jim’s imagination grew. “In the summer of ’69, I went to visit my brother Phil in Milwaukee and delivered a crude demo tape of Infinite Blue to Teen Town Records. It was rejected. In retrospect, it really wasn’t a good showcase of their talent. But one thing I learned was that there were small labels out there. It wasn’t just a big industry game. Going into my senior year I hatched my audacious idea of forming a record company. My older brother Phil, living in Milwaukee, agreed to be my partner. He provided the initial capital to set up the recording sessions, and also promoted the record to radio stations in the Milwaukee area. We kicked around a few names but found out they were already taken. We settled on Tevar, our surname Ravet, spelled backwards.”

With a name and a plan in tow, the brothers asked Patti to be the first release on their label. “We piled into a Buick and drove down to Dave Kennedy Studios in Milwaukee,” Patti laughed, recalling the spontaneity of the trip. The Infinite Blue boys and Patti recorded two songs, “Walkin’” and “It’s Gone.”

“I didn’t know what to make of it,” Patti mused. Their work was ahead of them. The brothers coordinated photos, posters, and a record release show. Patti even had photos taken. Her mother disapproved of the photo of Patti standing in front of a shack. “I said, ‘Mom, it’s artistic!’” 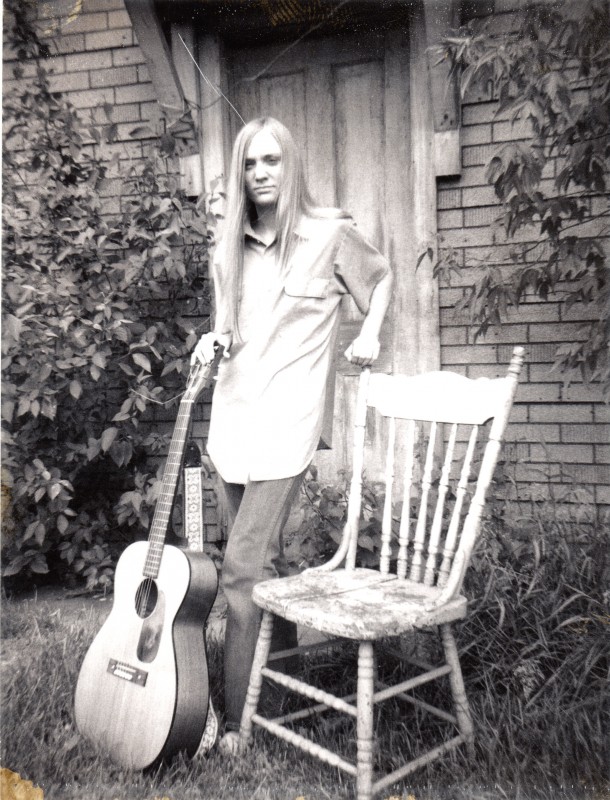 Taking the advice of a local Milwaukee DJ, the Ravet brothers sent the master tape off to Cuca Records to be pressed. “We didn’t think we’d have the records in time for the concert,” Patti said. The records were supposed to have arrived before the concert by Greyhound bus, but they were too late. A few days later Jim went down to the Greyhound station and picked up the records.

“We sat on the living room floor and opened the boxes like it was Christmas,” Patti said.

Jim dropped the records off at the local radio station in hopes of some airtime. They played the record every day. “My fondest experience was riding around town with friends and hearing my songs played on the radio,” Patti remembered. “It was a truly unique experience and very difficult to duplicate in today’s music environment. In the fall of 1970, as a high school graduate, I was off to college and went my separate way.”

If you’re fearing the end, don’t fret. We’ve got a bigger Cuca project in the works.