In March of 1987 I ventured to Berkeley for a punk rock show with a slightly older kid named Ben (later changed to "Claude"). I was headed for the newly opened Gilman St Project. We stopped off en route at the small city of El Cerrito to visit his friend Dave Henwood. Dave's house was being reconstructed so we moved onto a worn down elementary school a block away. We joined a small crowd of teenagers loitering; punks, metal heads & amorphous degenerates. As the sun went down a fire was started on the playground. We had the outlaw victory of our unfettered gathering -- momentarily we were free youth. There was no fear of reprisal. Not long later we did the short and easy trip to the show. 7 Seconds played to a packed house shit off their latest album "New Wind."

After that I would frequently stay at Dave's house in "E.C." as we would go to Gilman shows. Dave's dad Joel was cool in letting me stay there, but also cool in letting his kid learn drums the hard way. A feat that demands other people's patience. Joel had a thick skin that possibly was acquired during military service in Vietnam. This was also why the more seedier elements in the neighborhood didn't make a permanent presence with his feral teenager. Dave had just moved to E.C. from my hometown of El Sobrante and he was (like myself) transitioning fast from the Metal scene into the punk scene. A high school dropout, Dave was quickly going to the head of the class as a drummer and a punker. 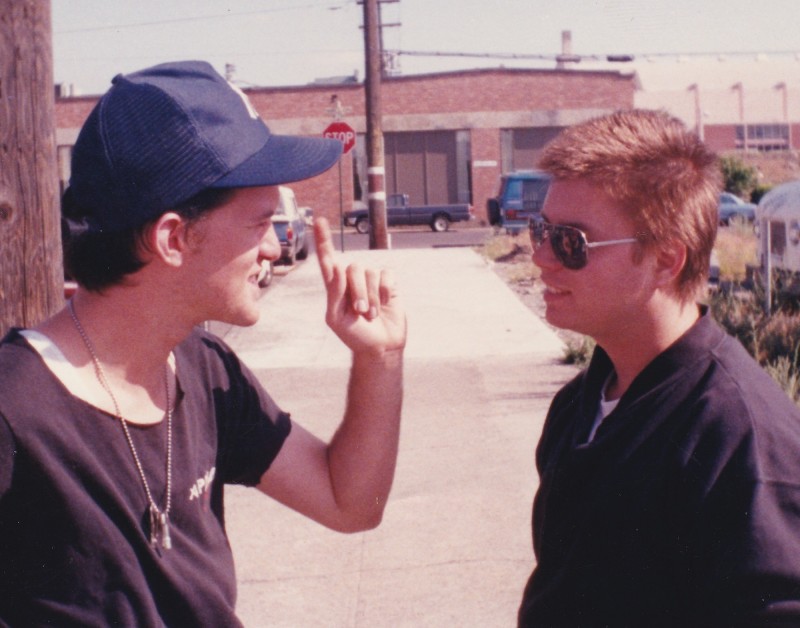 By the end of the year The Vagrants were looking for a drummer. Formerly called SDS they were one of the only bands from El Cerrito playing out. Dave made the position.

The band was a little "infamous" in our head for a reason other than them being homegrown. Their singer Brian was one of the people who organized an unpermitted show on UC Berkeley Campus. Billing it as an Anti-Apartheid protest, it was, in fact, a dream bill of local punk bands; M.D.C, Crimpshrine, Isocarcy, Boneless Ones, Corrupted Morals, Special Forces and The Vagrants. It was one of the first times I went to a punk show that happened outside the consent of the law.

The band practiced at Craig's house which faced the front of E.C. High School where The Vagrants attended. Craig was into motorcycles which I could relate to since my step-dad had me knee-deep in that scene. He looked like someone from the 1970's youth scene as seen in movies like The Bad News Bears or Over the Edge. He didn't look like he fit into the 1980's world of MTV and Breakfast Club much less the punk scene. Craig had no-frills with his bass playing. A far cry from the bombastic runs popular at the time say with Funk-Metal bands. His strength is a solid driving force. Much like a semi-truck or a train. Also his tone wore a certain charm of being dirty yet decipherable. A perfect compliment to Nick's guitar tone. Nick would mix power chords and open chords in his songs. Often his galloping and muted chords made the songs distinct from other underground bands content on just recycling the speed of D.R.I.

Nick and Brian seemed like they could maneuver in worlds of 1980's subculture; Punk, Hardcore Punk & skateboarding being their immediate background when I met them. Both were older than me and nearly out of high school. They had a clean and sharp style that got them access to the kids who weren't shameless fuckups. They were also tight. Much of the time the jokes, stories and sharp-tongued comments seemed like a continuation. An essential ingredient for a good song writing team. Likewise, the vocals and guitar work finished each other's thoughts. Brian sang with very little of the effect and aggression mandatory at the time in punk & hardcore. He had no growl and no bark that everyone from Crimpshrine to Metallica used to prove their street worth. Brian's voicing at times was almost like that of a kid singing. 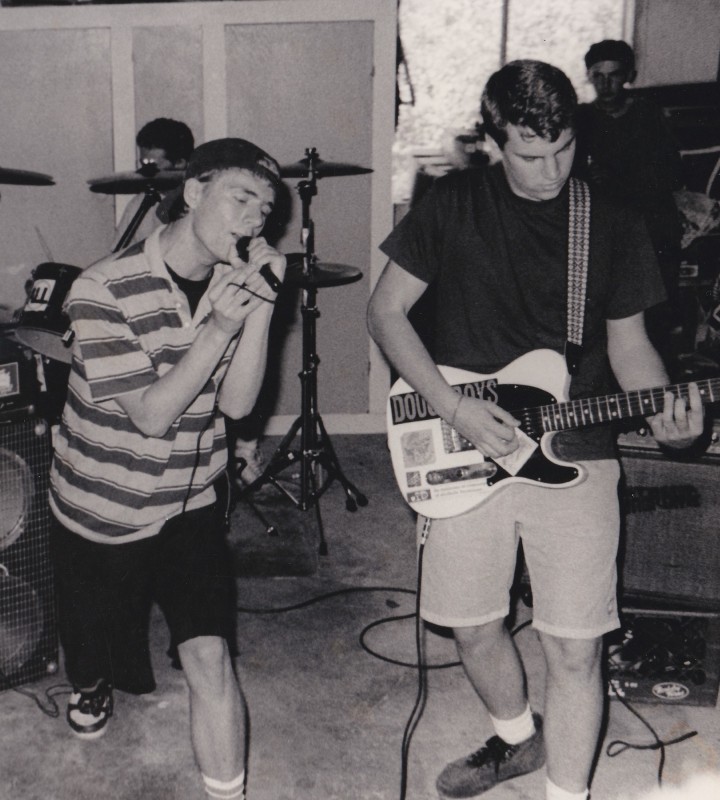 The band generally accepted me tagging along during their micro-parties. The excursions to $1 movie nights, drinking at suburban parties or clandestinely in nearby parks. I was also given a seat at their practices and a couple of times to out-of-town shows. This was first-hand instruction for me on how to organize a band. Seeing a riff turn into a song and a show invite turn into a road trip. The Friday night gig in Davis had a different kind of lesson when we ran out of gas on I-80. Parked in the middle of nowhere as a stream of commuters stared at us. Making it to the venue in time to see Isocracy play was anti-climatic. As if making through the adversity of the darken hour was the real point.

The scene at the time was ripe for shows in houses & other non-venues. Necessary since smaller bands were not able to access most clubs that had scams like "Pay to Play" requirements. I have a dream-like memory of The Vagrants playing a backyard in El Sobrante where they livened up the sleepy rural settings. Later they played one of the earliest shows I booked in my backyard. They were the most together act playing next to mess made by For Peace, Social Disease and a spontaneous jam with Billie Joe Armstrong and Lucky Dog. The show was small but kept the ball rolling.

The band would also contribute to my zine in its earliest stages. Dave writing humorous reviews, Brian interviewing The Offspring & The Dwarves and Tim (their roadie?) drawing surreal comics. This was instrumental in Absolutely Zippo being more than just my voice, or that of the weirdos of Pinole High School. It helped open the door to the larger scene....who would soon after that made great shit on paper. 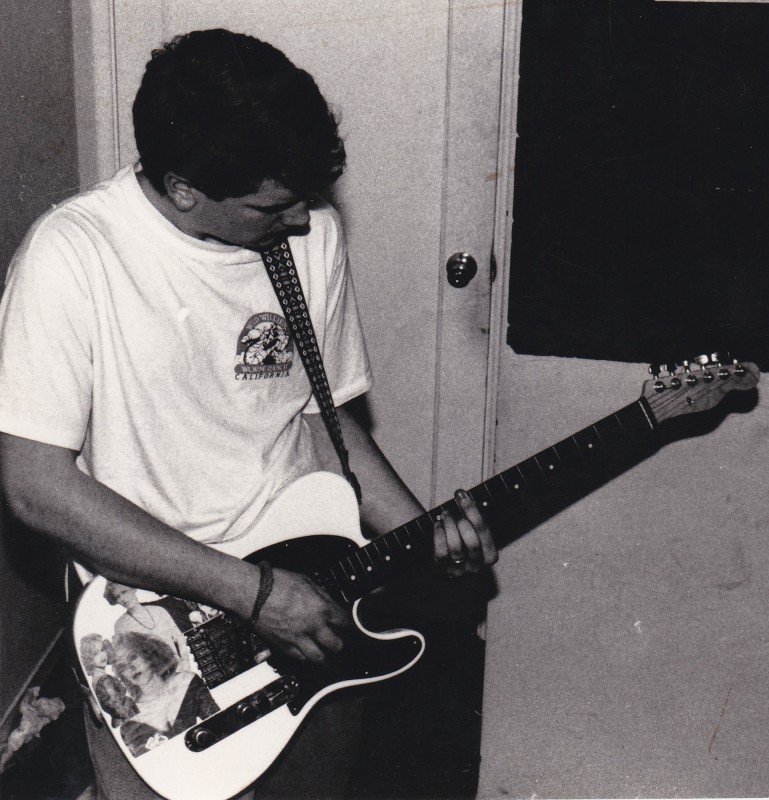 There was a general air of excitement about the arrival of The Vagrants first demo. The songs burst with optimism--even when covering painful personal topics. Recorded live on the Gilman stage by Marshall Stax, he had seen them play live several times and was able to capture a rawness. The band photos also looked good and fun and hinted at more adventures to come for the group. The cover art was provocative (Lemonheads were big at that time with this crowd and the demo cover harkens the Hate Your Friends album cover). Having a band is one thing--but having cool looking cool sounding recording is the lifeblood of a band. Especially when finding shows was scarce.

I was able to "hangout" while they recorded this first demo as well as later when they went into Alex Sergay's to set down their track for The Thing That Ate Floyd compilation. I believe this was their earliest experience in a studio but they handled the challenge with confidence. This gave me my first experience of what it's like recording. Significant since I saw many of the songs get worked on during practice and then was there as they got to be larger than life.

Shortly after the first demo, the songs that are on the 2nd demo were being introduced at practices and shows. The same qualities that worked for the old songs remained but with more nuance--more dimension. It's like they steered away from the trappings of the punk scene and instead dug deep for a real emotion, free of generic cliches of the day.

As the Gilman scene became more gregarious and flashy The Vagrants became more introspective. Brian no longer would do frontman duties of jumping around and making photographic faces to glib remarks. Often he would turn his back during the live set. Evidently he was more focused on being crumpled into the meaning and impact of the new songs. Brian's vocals became deeper and personal yet, also done with fewer words. Dave's drumming made more flourishes often deviating from the beat he had established. Nick's guitar became comfortable in playing soft and brooding runs-- at times contemplating beauty. Distortion became less the cornerstone of a song but just one of many things to use--as if to add colors & depth. It was Craig who was the only marker of the band as it was before..always driving, fuzzy and distinct. 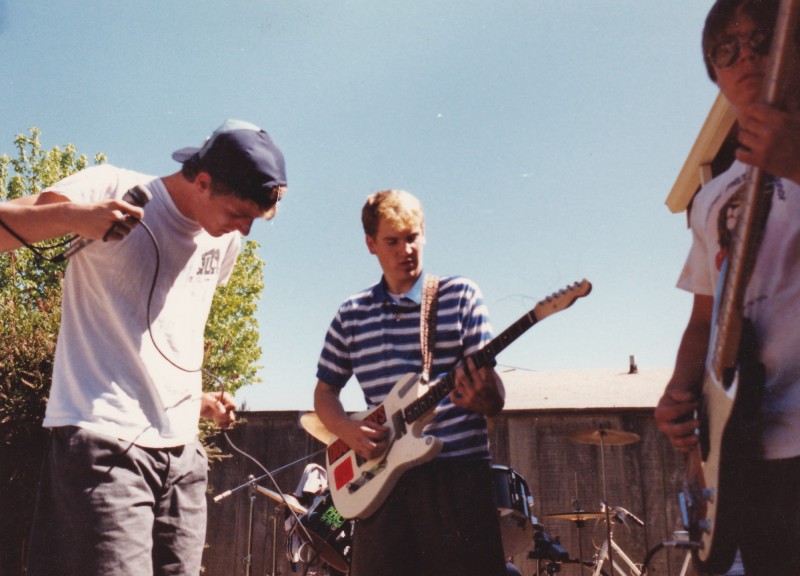 Remember The Vagrants were still teenagers when they wrote and performed the first demo. The zeal and catchy pop-punk they made captures the summer-time of youth quite well. The 2nd demo (and soon Pot Valiant) on the other hand documents the early stage of adulthood. I have very little knowledge of the terror, heartbreak, and disappointments Nick & Brian were going through at the time. The family crisis, the failed relationships, the lost friendships, the shitty jobs with shittier pay, the cheap highs turning into unbreakable lows--- but its evident in these late-era songs.

Not many of the punks from the San Francisco/Berkeley scene regarded what they did much. In fact, the band seemed to connect most with the outsiders of the punk scene. The kids in Scrutinize My Brain from San Mateo, The Tally Hoe kids in El Sob/Benicia and the sun-baked kids in Sacramento & Davis. The cartoon-like punks would soon take over the scene in the 1990s. It was common in the scene for people to re-imagine themselves. Changing one's name, look and music are just a means of evolution. Pot Valiant were evidently concerned with expanding from the cheer and jeer of teenage gatherings and forged a new path. I was one of the people that followed the parade into prolonging the punk stereotype --acquiring a leather coat and a blue mohawk and made cliche songs to get the gigs.

OK obscure fact. I was inspired by Nick's guitar playing--in particular the song "Hanging By A Thread" where I tried to imitate his picking of notes. I poured some flange effect over my attempt and my band Blatz used this for the chorus of our song "Berkeley is My Baby & I Want to Kill It." I Know, a far different trajectory of the classic Vagrants song. But that is the wonder of art.

Now in the year 2019, the cartoon world has seemed to have taken over. At least its been turned up to "11" to keep people from peering too deeply into the dystopia that's been created. The Pot Valiant songs once seemed to me overly spacious and unconcerned with catchy riffs. Cold. Now they seem like appropriate commentary of the world since 1989. Epic, catastrophic, human in the face of the grinding machine. Also now not only is fire a rarity in the daily life of urban people, but El Cerrito and places like it, have banned smoking in most public places. This hasn't erased the urge in people to gather around the flames during the long night. Which perhaps is why events like Burning Man can charge an-arm-and-a-leg prices. Likewise, the lion share of our good bands are relegated off to high-security venues with high ticket prices. Yet we have not lost the urge to gather for music in autonomous spaces. 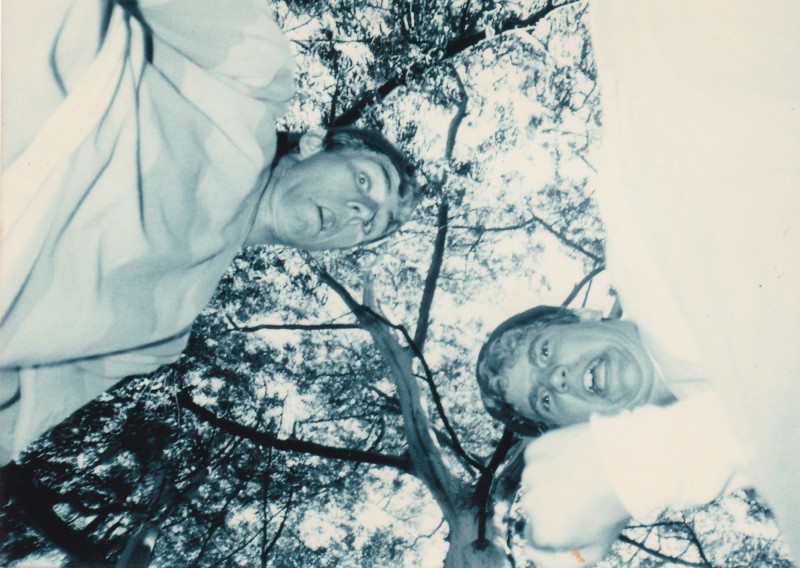