As the hippie movement hurtled towards its imminent demise, bad vibes infiltrated the rock world. Tainted LSD, loud motorcycles, and a series of brutal deaths spawned inspiration for guitar-wielding teenagers across the globe. Implementing deafening fuzz and satanic screams to create their proto-metal monstrosities, short-lived stoner bands pressed their lysergic experiments in microscopic quantities before blacking out entirely. Lifted from the ashes of the acid rock hell fire are 18 distorted tales of dope fiends, pill poppers, and the baddest of trips.

In the fall of 1967, signs of San Francisco’s darkening fell like leaves. The transient young people who’d invaded the Bay Area to cash in on the media’s cheap drugs/free love promises had departed for points east. Haight-Ashbury, what remained of it, had become an open-air market for illicit substances, overrun with speed freaks, panhandlers, and Hell’s Angels motorcycle club adherents. Throughout the summer, leather-clad Hells Angels had become a fixture in the San Francisco scene, their Harleys crowding sidewalks outside the Fillmore West and the Carousel Ballroom, on nights when hometown rock n’ roll heroes the Grateful Dead or Big Brother and the Holding Company crowded the stage.

Hippie harbingers Ken Kesey and his Merry Pranksters had established ties to the Angels in ’65, introducing the biker brutes to LSD at a house happening in the hills of nearby La Honda. The Angels turned on and, for the most part, got along with psychedelic types who just liked to get high and groove. They loathed Berkeley’s politico set and were far from peaceniks. In less than two decades of activity, Angels had racked up more than 800 felony arrests—for sexual aberrations, drug charges, assault, and even attempted murder. On August 24, 1967, a prominent Hell’s Angel known as Chocolate George cruised Haight and crashed—at high speed and most likely high otherwise—into the back of a ’55 Chevy. For droves of locals, the demise of Chocolate George signified the Summer of Love’s departure.

From his apartment at 369 Haight Street, San Francisco musician Dickie Peterson looked down on the deathscape of Chocolate George’s last ride. At summer’s end, suffused with the Haight’s baddest vibes, Peterson and his bandmates took to Amigo Studios in North Hollywood to capture their fried acid trips on tape. They named themselves Blue Cheer, after a potent strain of LSD cooked up by Grateful Dead engineer and chemist Augustus Owsley Stanley. Vincebus Eruptum—mangled Latin for some kind of conquering eruption—emerged at the dawn of ‘68. The LP’s lead single was a fuzzed-over rendition of Eddie Cochran’s 1954 hit, “Summertime Blues.” On May 4, 1968, the single hit #14 on the Billboard Hot 100, sending fuzz-fueled acid rock into wildfire combustion. With pained ears and expanded minds, early Stateside adopters wasted little time cutting their own lysergic episodes to wax.

In 1968, Ty Gilliland was introduced to hard drugs by a member of the Outlaws motorcycle club after a gig in Columbus, Ohio. “They liked us enough because we played some Stones songs,” Gilliland said. “One of the Outlaws they called Muscles came up to me after a show. He held out his hand and said, ‘This’ll make you feel better.’ It was speed. Boy, I could sure play fast on that stuff.” And so he did. One amphetamine addiction later, Gilliland wrote “Speed Freak” for his band, The Rituals. Four hundred miles away, on the eastern seaboard, Baltimore high schoolers The Cross Blood Experiment were turning on with LSD—Orange Sunshine, specifically, a varietal concocted by the Brotherhood Of Eternal Love. They named their distortion-drenched single after the stuff, and made the drug’s effects sound far less than sunny. The embodiment of a bad trip, it comes on slowly, weaving vivid lyrical trails before speeding on into a rhythmic gallop beside an unhinged guitar solo. Out in Kansas City, Paul Parkinson of Bulbous Creation was having just as little fun, on pot or smack or whatever it was that had him “Hooked.” “I’m sick of hearing myself,” he sang. “My head hurts like hell. My mouth so dry I can’t spit. Oh Lord, I wish I had another hit.”

Darkness billowed out of the psychedelic cloud in the final weeks of 1969. In the months leading up to the West Coast answer to Woodstock, lurid tales of Charles Manson’s deathcult and their affiliations with rock’s literati had spilled across the headlines. The Rolling Stones, Jefferson Airplane, Santana, and Crosby, Stills, Nash, and Young were set to share the bill at Altamont Speedway in northern California on December 6. Bad vibes disturbed the air long before sunrise. Concert-goers arrived the night before, ill-prepared for near-freezing temperatures; for warmth, they burned fencing, garbage, and rock show road cases, adding a crusty stench to a cold, dusty valley. As the morning rolled on, the highway leading to Altamont clogged for miles. Hell’s Angels showed up for security duty, parting the dense crowd on 800-pound metal bikes. By noon, the medical tent overflowed with acid casualties. An hour later, when Santana took the stage, the Angels had long since helped themselves to handfuls of uppers, downers, wine, joints, and the $500 beer allotment they’d received in lieu of pay. Power-mad, they descended on any fan who posed even the slightest threat, unleashing flurries of fists and pool cues. At sundown, the Stones mounted the stage, as tension filled the air. "The vibes were bad,” Grace Slick recalled. "It was that kind of hazy, abrasive and unsure day. I had expected the loving vibes of Woodstock but that wasn't coming at me. This was a whole different thing." Breaking point at Altamont and “Under My Thumb” arrived together, when a juiced-up Angel stabbed 18-year-old fan Meredith Hunter repeatedly with a buck knife. Hunter had been armed; he’d been on speed; he died of his wounds. The 1960s were officially fried.

Noxious fumes quickly crossed the Atlantic, as evidenced by Black Sabbath’s emergence from the haze on a Friday the 13th in February of 1970 with their Billboard debut LP. It’s a record that bears the pall of the sunny ’60s into a drug-addled English wood; lyrics are written in Lucifer’s voice, and “The Wizard” is as much an ode to Gandalf as it is to the band’s dealer. Sabbath countrymen Brass Alley and Sardonicus got the memo, dropping pink pills on the way toward eroding their own brains. In Portugal, the like-minded band Xarhanga didn’t even bother to mince words, delivering an actual “Acid Nightmare” that spun at 45 RPM. And a Viennese group called Novak’s Kapelle planted a flag firmly in the drug rock canon with their daring single “Hypodermic Needle,” its message mangled by a language barrier and a misunderstanding of what exactly was happening in the U.S. rock scene.

As the ’70s dragged on, a deep, dark hangover set in. In the American Midwest, Whistler’s Mother, TNS, and Gollum came in dehydrated and fumbling with the child-proof cap on a bottle of expired aspirin before issuing “Dark Dawn,” “Times Up,” and “Prayer of Despair.” In the south, the Shy Guys fretted about the dangers of lightning, Mass Temper wrote an ode to a drunk driving casualty, and The Purple Sun preached of “Doomsday.” Terre Haute, Indiana’s Goliath had made most of their career abusing drugs, but the comedown came at a terrible cost. “I had two guitar players and both of them committed suicide,” said Goliath drummer Steve Peterson. “In those days, it was very hard to keep young guys straight.”

The nightmare is over, but the flashbacks remain. 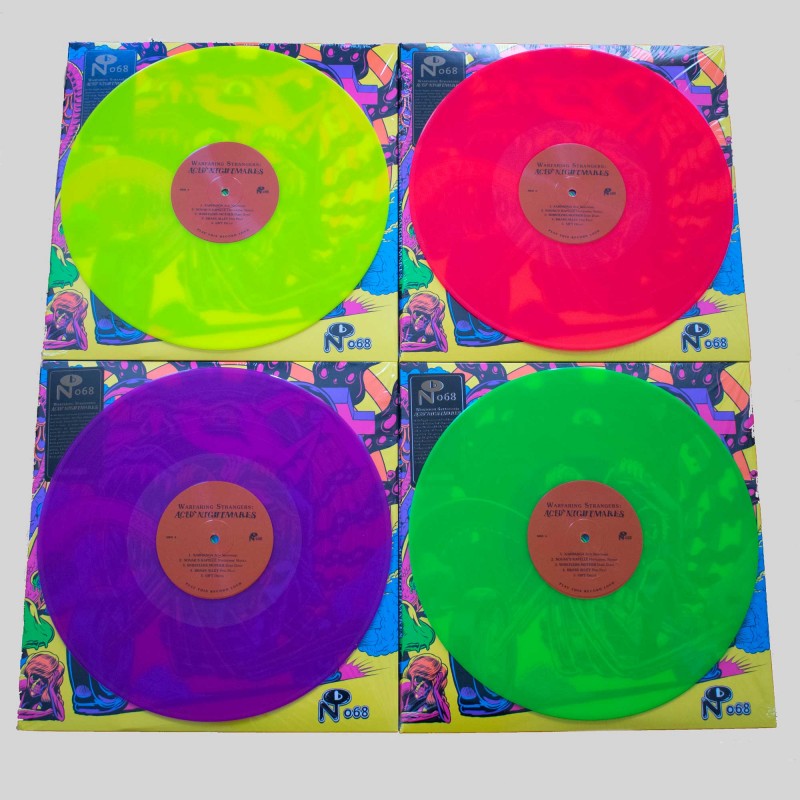