In the 1976 hardbound volume Minnesota’s Black Community, publisher Walter R. Scott profiles the state’s African Americans, in 18 chapters including “Early Black Settlers,” “Government and Law Enforcement,” and “Social Agencies.” The burgundy-and-black yearbook—216 pages long and 150 years deep—boasts a Sports section starring several forgotten Vikings, a handful of Twins, and a 20-year-old Tony Dungy in Adidas shell toes, on the field at an empty University of Minnesota football stadium, loading up a long ball to no one. The Entertainment section captures local gospel cooperative Sounds of Blackness on low-slung risers, decades from a Grammy but in clear view of a fire exit. David Ruffin gets down with misleadingly named locals the Philadelphia Story, and the sequin-clad Rockie Robbins sits on invisible pedestals with the Mystics. Just above them on page 181 stand Prophets of Peace, featuring Anthony Scott, Walter R. Scott’s eldest son and the book’s co-publisher.

Collectively one toke over the line, the individual Prophets of Peace look like Blaxploitation extras, their shirts unbuttoned to below the national average. Their inclusion in the book was not undeserved; in fact, their realization quite effectively mirrored the senior Scott’s publisher’s statement: “It is my fervent hope that this volume will serve its purpose: generate greater understanding between the races, and, as a result, help close the gap which keeps white Minnesotans and black Minnesotans from clasping hands to work towards a United America.” Scott had brought his family to the Twin Cities from Chicago in the late ’40s and by the early ’60s was publishing pamphlets and periodicals in both Midwestern cities, creating awareness in the black community of its own existence and achievement.

It is my fervent hope that this volume will serve its purpose: generate greater understanding between the races, and, as a result, help close the gap which keeps white Minnesotans and black Minnesotans from clasping hands to work towards a United America.

Through middle school and high school, the younger Scott and cousin Sonny Williams performed as the Majestics with classmates Larry Loud, Bill Lubov, and Stan Kipper. Upon graduating from Washburn High School in 1968, both Scott and Williams enrolled at Mankato State University in pursuit of music degrees. Between growing a beard and memorizing James Jamerson basslines, Scott’s formal education endured a few hiccups while campus-wide jam sessions and marijuana cigarettes shaped the budding bassist’s musical identity. Homework persisted, but neither Scott nor Williams could ignore the beck and call of a fully stocked orchestra room. Mankato State jazz band director and trumpet player Gary Willison only helped to blur the lines further, gigging with the gang on weekends.

Mankato enrollee Steve Bradley was on a similar rampage to higher education. After cutting his teeth drumming with regional doo-woppers Dave Brady and the Stars while still in high school, his academic sabbatical of 1970 would volley him back to the Twin Cities where he joined a fledgling swarm of bar flies known as Willie and the Bees. Led by Willie Murphy, the Bees would celebrate 1971 at an abandoned summer camp, on an island in the middle of Lake Minnetonka, laying down tracks for the self-titled debut of 21-year-old Bonnie Raitt. But Bradley’s fragment of the spotlight left him unfulfilled, even with his drum set nudged up against the front of the stage. Upon graduating from Mankato, Scott returned to Minneapolis with a head full of ideas. His run-in with Steve Bradley would be a fortuitous one. 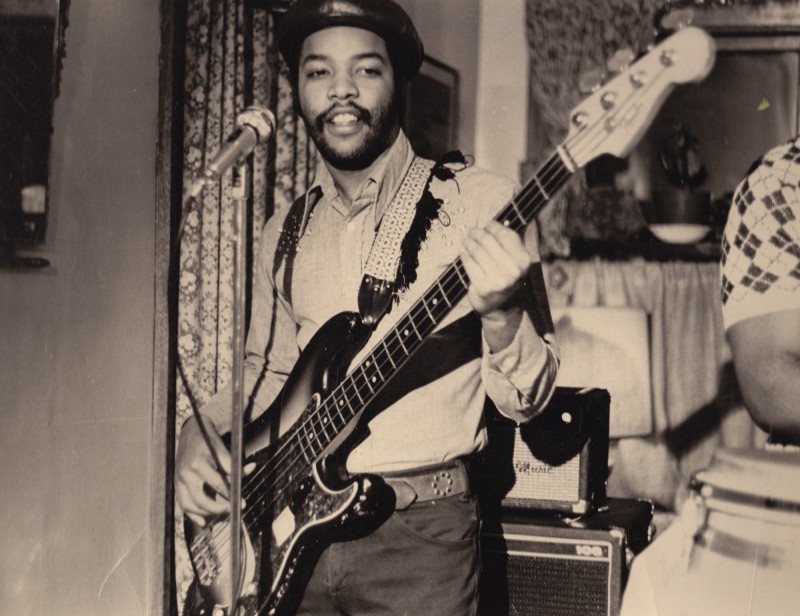 While securing investors and advertisers for Scott Publications, Scott, Bradley, and Williams began conspiring together on a new project. When it came time to name the group, Bradley liked the Prophets, and Scott and Williams believed “peace” might make a nice qualifier. A resume was compiled, promotional photos shot beneath Como Park Conservatory’s “Crest of the Wave” nymph, and a logo designed by Bradley—a petal-clad ying-yang mandala, with the words “Prophets of Peace” orbiting the circular floral arrangement. The group’s core members began writing new material to embellish the Top 40 fare being regurgitated by their peers.

David Rivkin was an early adopter for the Prophets of Peace. Having grown up on Amos Heilicher’s Minneapolis sounds, he moved to Los Angeles in 1968 to peddle his folk-rock compositions around Hollywood. After leaving “How Much I’ve Lied” in the custody of Gram Parsons, he returned to the Twin Cities in 1974 and began searching for groups to record. Booking time at both Audiotek Studios Inc. and Sound 80, Rivkin got behind the wheel of the Prophets’ recording project, jamming with the group away from the studio. Scott’s neighbor and jazz pillar Morris Wilson arranged and deranged the group’s would-be theme “P.O.P.” and outfitted the outro with dueling sax solos. “46th Street Bump Time” would serve as an instrumental ode to the Prophets’ Southside stomping grounds, and “Get It On,” with its summery sophistication, accentuated reedmen Wilson and Andre Broadnax’s roles in the group. With lead vocals split between Williams and stringers Donald Thomas and former Fabulous Fascinator Doris Johnson, the aspirational “You Can Be” exuded crossover appeal and positivity. 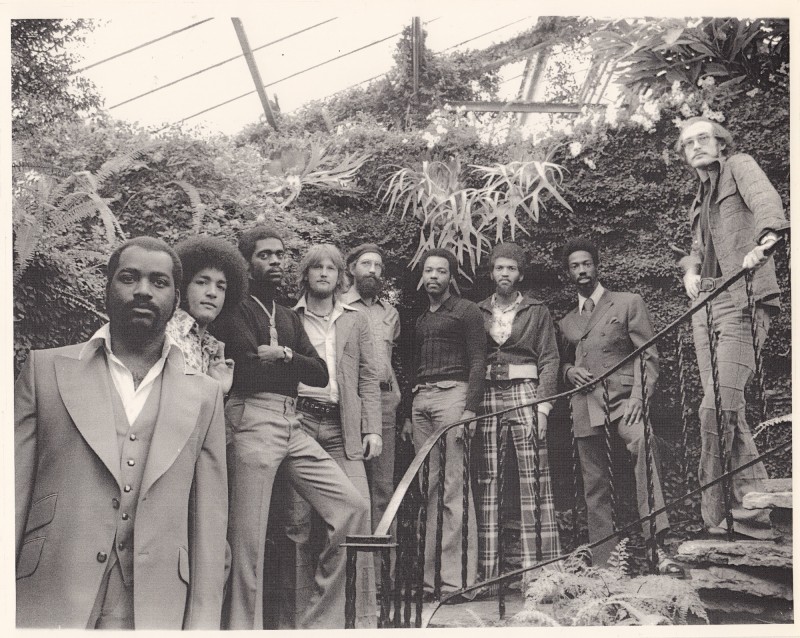 When vocal group the Philadelphia Story and backing band Sweet Taste of Sin—on pages 183 and 182 of Minnesota’s Black Community, respectively—abandoned their conjoined post at The Flame at 16th and Nicollet in the summer of 1975, the Prophets of Peace stepped up, performing every Friday at the notorious nightclub. With country music on the front stage and dance music in back, The Flame entertained an oil-and-water cross-section of customers. On a night off, Scott bumped into musician Bruce Palaggi outside of his Southside apartment building and, noting Palaggi’s saxophone case, invited him to an approaching Prophets gig. Palaggi, having previously performed with Haze, was no stranger to The Flame, but he flinched at Scott’s invitation to check out an upcoming engagement. “Nobody liked The Flame!” Palaggi recalled. “I know in the early ’50s my mother had seen Sarah Vaughn there, but by the time I started going there, it was a much rougher crowd.” Regardless, Palaggi was impressed by the group’s sound and signed on alongside wingman/trombonist Ron Atkinson.

In an August 1975 move designed to increase awareness of his own combo, Steve Bradley established the What’s Happening in Music hotline (“W.H.I.M.”), which could be accessed daily from noon to midnight. Of the 69,000 calls placed to 823-8207 during its first six months, a disproportionate number of queries were for rock acts and bluegrass jams. Increasingly infrequent Prophets gigs prompted few to dial. Tethered to the phone banks for half the day, Bradley filed for non-profit status, hoping to supplement fees from venues with public funding to cover operating costs. In early 1976, Bradley left the Prophets, opening a studio on Central Avenue and hosting karaoke events around town. W.H.I.M. remained in the frame, hosting a fundraising Funk Festival on Monday, May 16, 1977, with the Mystics, Free & Easy, and Herman Jones and the X-Citers at St. Paul’s Prom Ballroom. Bradley began studying the piano, looking to expand his own musical universe. “I plan to be making music for a long time and the only way I can do that is to establish my own music,” Bradley told The Insider in March 1976. “That means constantly improving the music and the playing. It is an endless cycle, man.” 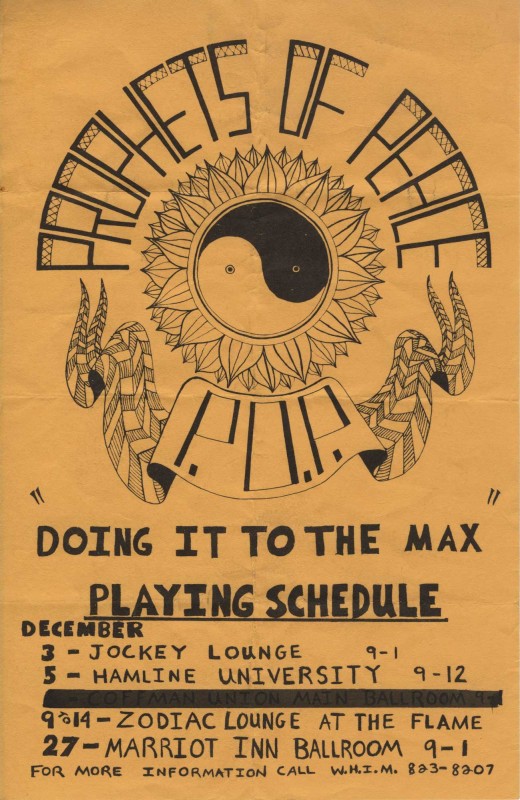 Bradley’s exit necessitated a line-up change, but P.O.P. added more than just a replacement drummer. Timekeeping was split between Wilbur Dugas for studio engagements and Doug James for performances. The horn section’s finishing touches would arrive by way of St. Paul, where Sterling, Colorado, native John Curlee had relocated in pursuit of a Macalester College music degree. Gripping a blues harmonica, he and multi-instrumentalists Clyde Thomson and Richard Greenwood cut the folk-rock curiosity One Time, One Place in 1972 as Greenwood, Curlee, and Clyde. Alongside guitarist Dave Dahlgren, Curlee merged into the club scene via O.C. and the Pipes, eventually securing passage for he and Dahlgren aboard the Prophets of Peace boat in time for their final recording session. On July 8, 1975, the Prophets completed the final mix of their 45, “The Max” b/w “You Can Be.” Tracked at Sound 80, “The Max” featured a hypnotic bass line, rich percussion, and a roster that most closely resembled the surviving Prophets of Peace. “You Can Be” got the B-side, with the remaining tracks put on ice for a follow-up that never materialized.

A promising opportunity to open for KC and the Sunshine Band at the U of M went awry for the Prophets when bandleader Harry Wayne Casey refused to leave the airport in anything other than a limousine. “Not only did they not have a limo for him,” vocalist Sonny Williams clarified, “but KC was angry because the promoter wouldn’t carry his luggage! And we were ready to jam—we were ready for that night.” With the onset of disco, the band grew bored, restless, and eventually apart. 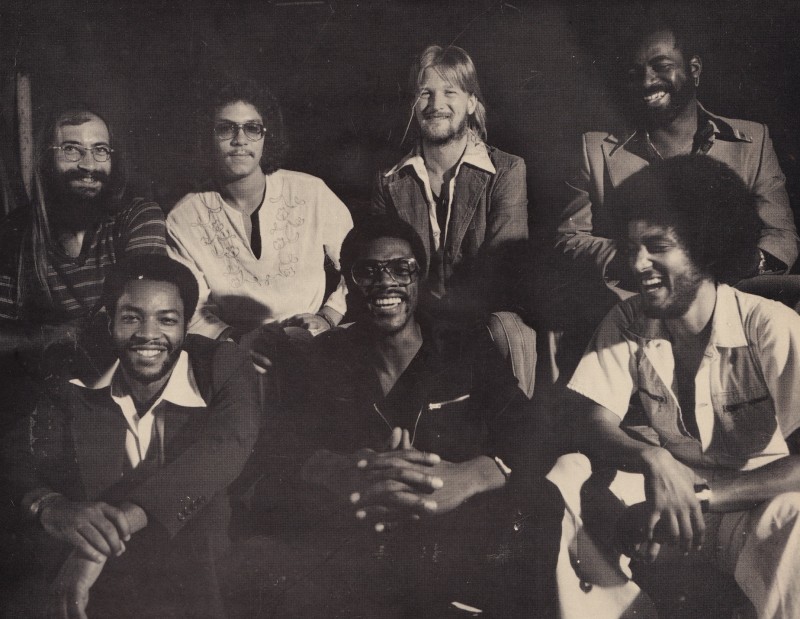 Prophets of Peace, as a collective, had run its course. Bands who made it out of Minneapolis had to be in the right place at the right time; Prophets of Peace had been neither. “Sometimes you’re out there—it’s 2 or 3 in the morning—and you’re loading up Anthony Scott’s big bass amp and schlepping all this equipment around,” recalled Curlee. “You felt more like a mover than you did a musician.”